Go back to publications

How to influence the IMO

The International Maritime Organisation (IMO) is interesting as it allows stakeholders to take part in creating the rules that affect them. We want to highlight some characteristics of the organisation and shine some light on how the rules are made. We also include some information on how to have your voice heard in the IMO, especially as a small organisation.

What is the IMO?

The IMO is a specialised agency of the United Nations (UN) responsible for the safety and security of shipping and the prevention of marine and atmospheric pollution by ships. Its main role is to provide an effective, universally adopted and implemented regulatory framework for the shipping industry. It consists of 171 member states, 77 Non-governmental Organisations (NGOs) and 65 Inter-governmental Organisations (IGOs). The IMO itself does not take decisions as an organisation. The decisions are taken by its Members, thus making the IMO a consensus organisation.

How is the IMO structured?

The IMO consists of an Assembly, a Council and five Committees, which are as follows:

Besides, several Sub-Committees also support the work of the main ones. We will further discuss the MSC and the MEPC, as they are the ones concerned with countering marine pollution.

The MSC is the highest technical body of the IMO, and it consists of all Member States. It is concerned with the construction and equipment of vessels, manning from a safety standpoint, maritime safety procedures and requirements, logbooks, navigational records and any other maritime safety matter within the scope of the IMO. The MEPC also consists of all member states and works on the prevention and control of pollution from ships. In particular, it focuses on adopting and amending conventions (such as MARPOL), regulations and measures to ensure their enforcement.

Several Sub-Committees assist the MSC and MEPC, such as:

In turn, all of these take submissions from relevant working groups and forward them to the main committees for approval.

For a complete picture of the IMO structure, please see the below image: 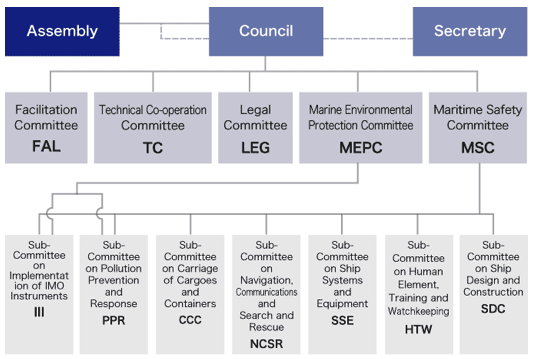 How to change the regulatory framework?

The IMO regulatory framework needs improvement as the maritime industry is facing significant technological developments. A concrete example is the parameter method, still used and promoted in the industry when checking compliance of ship diesel engines with the NOx emission standards. Meanwhile, the market provides monitoring systems that are more efficient in ensuring compliance with international standards. One of the reasons for using it may be that it is still legal under the MARPOL Convention. Another may be that the industry is more comfortable with it since law-making is a time-consuming process. But being legal does not mean it is efficient, so it is up to NGOs and IGOs to make a change.

To make a change an organisation can either apply for consultative status at the IMO or make its voice heard through the working groups.

To apply for consultative status, an NGO or IGO must send an application to the IMO Council. The Council consists of 40 members elected by the Assembly, which meets only every two years. With this status, the organisation is expected to attend working groups, meetings and make submissions. If the organisation does not contribute, it loses its consultative status after two years. Taking this road, the organisation needs significant resources and must put a lot of work into maintaining its status, as losing it would cause significant damage to its credibility.

Having your voice heard indirectly, through the working groups, may not be as effective as having a consultative status, but the result can be the same. It is a slower process, as you do not have a direct influence on the IMO discussions, but it is the way to go if the organisation lacks the necessary resources. By searching the relevant working groups and building up influence within them, an organisation can, with time, make amendments to the regulatory framework of the IMO.

The IMO is a transparent organisation with strict and clear guidelines. It does not take decisions itself but checks compliance with regulation informs its members of the agendas and dates of meeting and advises them in case of a mistake. However, changing the legal framework is a difficult and time-consuming process with a large-scale impact on the industry. In the end, the future of the marine industry is in the hands of those organisations that choose to work towards improving the law.