Go back to publications

Introduction
In Part 1, we found that hydrogen can be very environmentally friendly but the technology around it is still new and expensive to manufacture sustainably, whilst the space required for storage remains a problem. Ammonia is very promising, although there are concerns about whether sustainable production can meet the demand if the world fleet were to make the switch. LNG is well-known, the industry has experience with it, but it is still a fossil fuel with questionable environmental benefits.

Now, we take a look at methanol, biofuels and hybrid systems. Methanol and biofuels have a long history in shipping as cargo. Hybrid systems, though not fuel, but rather a whole propulsion system, are a promising opportunity for reducing emissions and increasing efficiency.

Methanol
Methanol, also known as methyl alcohol or wood alcohol, has been in use for many years. For example, the ancient Egyptians used it in the embalming process and Germans as rocket fuel in World War II. It is a colourless, volatile flammable liquid with a pungent smell and it is poisonous if ingested. It is easier to store and handle than LNG, ammonia and hydrogen. Currently, it is most commonly produced on a commercial scale from natural gas. CO2 emissions are around 10% less than with conventional fuels and can become zero if the methanol is produced through biomass, biogas or renewable electricity and supported by carbon capture technology.

Methanol’s specific energy of 19,700 kJ/kg means that it requires about 2.54 times more storage volume than conventional fuels. However, when comparing to LNG, one needs to take account of the extra space required for packaging factors such as cylindrical tanks, insulation, boil-off gases, etc. From a safety point of view, methanol is easier to handle than LNG, although leakages produce heavier than air gas that requires alarm sensors. Fires are smokeless and can be doused by water. Methanol leaks and spills also have much less impact on the environment than conventional hydrocarbon fuels. It dissolves readily in water, and only very high concentrations can create major environmental problems. Methanol is produced naturally in the ocean by phytoplankton and readily consumed by bacteria microbes.

Methanol can be, and already is used in spark-ignition internal combustion engines, e.g. in racing cars, due to safety reasons after the seven-car crash in the 1964 Indianapolis 500 race. The main disadvantages of methanol are the acidic products created during combustion. Special additives can mitigate the effects of the acidic compounds, but they could increase component wear.

It is safe to say that methanol has the potential to serve as an interim solution. While it is not generally carbon-neutral, there is sufficient experience and infrastructure to use it in the coming years, until the industry makes a full transition to zero-carbon fuels. One concern is that the many industrial applications of methanol may crowd out its use as a marine fuel. Likewise, its requirement for storage space may limit its use to vessels on shorter voyages.

Biofuels
Biofuels is a term that covers a wide range of fuels in liquid and gas form, made from biomass (e.g. rapeseed, soya beans, etc.) or biological waste such as used cooking oil. One major issue with biofuels is producing sufficient quantities to replace conventional fuels without a serious environmental impact elsewhere. There is, after all, only so much used cooking oil available.

Growing plants specifically to create biofuels reduces the land for growing food and can lead to further deforestation. The use of waste products from food crops makes a lot of sense, but the volumes of such waste will be limited. So, although there are already some experimental applications, it is likely that these fuels will remain either an additive or have a niche application.

Bio-oils can be mixed with distillates, using surfactants to create an emulsified fuel mixture. Emulsified fuels, even as microemulsions, can separate over time and typically have low shelf lives. The impact and extent of the water in the bio-oil is another factor to consider. If the water separates, microbes may proliferate in the boundary area between the water and the fuel, which, in turn, could lead to blockage of the filters.

Some of the biofuels, which show the most potential for maritime applications, are known as “drop-in” fuels, i.e. they can be used in existing engines designed to work with MGO or HFO. The main benefit of drop-in fuels is that they do not require significant engine modifications and have similar characteristics to traditional marine fuels. These are already partially in use as blends for traditional marine fuels to reduce emissions. In so far as they use waste products, this must be a good thing, but it is will not be the solution to making shipping carbon neutral.

Hybrid Systems
The electrification of cars has sparked a lot of interest in the possibilities for marine application as well. However, it seems unlikely that we will see many purely electrically driven vessels, at least until fuel cell technology has been fully developed. The reason is simply the weight, space required and cost of batteries. However, the use of batteries in a hybrid system is already taking off. In 2020, there were 320 hybrid-powered vessels worldwide, most of which are ferries since they have easy access to shore power and usually focus on short, regular voyages. As port authorities get more restrictive about using onboard generators to produce electrical power once in port, batteries can be seen as part of the solution. Likewise, batteries can be used very successfully in dynamically positioned offshore support vessels. In the past, these vessels would, for safety reasons, have to run two engines on low loads whilst they waited on station. This is a very inefficient use of these engines both in terms of fuel consumption and maintenance costs. Fitting sufficient battery power to provide enough time to start the second engine means that these vessels can operate safely with only one engine running at a much more economical rate.

Besides reducing exhaust gas emissions, one of the biggest advantages of hybrid power is the flexibility to cover peak loads whilst manoeuvring. This is potentially useful for a traditional installation when sizing the required auxiliary generating power. It will be especially useful with fuel cells, which are efficient at producing a steady rate of electricity but are not so efficient with variable rates.

Of course, hybrid systems are more complex and more expensive than a traditional marine engine. The design and implementation of hybrid systems are still fairly new and design concepts require extensive testing to fine-tune and eliminate operational challenges. Whilst batteries are unlikely to replace the main propulsion unit on a vessel travelling long distances, they could find a place in optimising the energy consumption on vessels.

There are two major concerns with battery power. The first relates to safety and is the so-called thermal runaway – a short circuit within the battery that can lead to a fire. However, modern batteries have safety measures to reduce this risk. The second is that the current design of batteries uses rare minerals already used for car batteries, which may limit their use unless new technologies offer a solution.

Conclusion
Considerable efforts are devoted to developing carbon-neutral fuels. Hardly a day goes by without some announcement in this respect. However, it is not clear which of these fuels will come to predominate in the marine field.

Indeed, as you will see from the chart below, the assumption of ABS (and many other respected organisations) is that no one fuel will tick all the boxes with the result that the marine market for fuels will be much more varied than it is today. This presents both shipowners and fuel suppliers with difficult investment choices. And the same is, of course, true for our members. 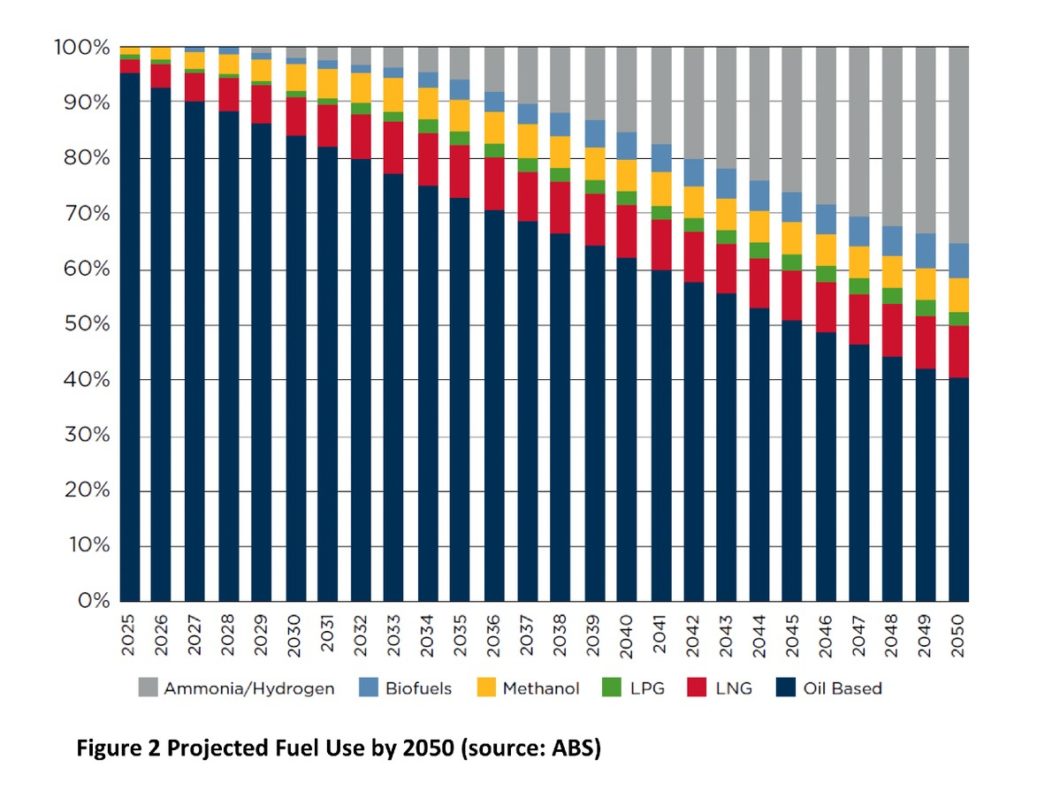 The industry is committed to the path of decarbonisation and companies and institutions are actively looking into alternatives to traditional fuels. At the same time, there are ways to make traditional fuels cleaner. For example, the National Maritime Research Institute of Japan has found that carbon capture could reduce emissions up to 90% before 2028 even with traditional fuels. The captured CO2 can then be used to generate emission-free power for the grid.

The crucial point is the balance between price, availability, infrastructural requirements, environmental benefits and safety. The current technological opportunities allow the use of single fuels, dual fuels, carbon capture, and hybrid technology. Overall, it seems likely that LNG will take the lead for now despite the issues with methane slip. Ammonia and methanol show great potential whether injected into a reciprocating engine or used in a fuel cell. Biofuels and hybrid solutions will play their part, whilst hydrogen is most likely to be used within a regenerative process rather than as pure liquid hydrogen. However, the only thing we can say with certainty is that the future is uncertain.

We are now bracing to see what comes out of this race and what the marine engine will look like in 30 years.